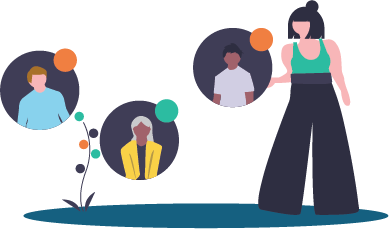 Turn on suggestions
Auto-suggest helps you quickly narrow down your search results by suggesting possible matches as you type.
Showing results for
Search instead for
Did you mean:

Sharing part of my story

I've been hesitant in sharing the hardest time in my life on this forum. As I share, I now leap forward and try without shame to just break down what happened to me and perhaps someone else might just feel less alone.  You see, my world although filled with many people, was almost shrunk in size due to my inability to share with anyone what was happening. My husband knew most of it due to witnessing and living through it.
Seventeen years ago we welcomed a beautiful, healthy baby into the world. I read all the parenting books, worked on a household routine and set up the nursery with pride. We welcomed lots of visitors to the hospital who sat in the private room and took turns nursing our baby. We were ecstatic. All alone with our baby on day two in my hospital room, I obsessed over his blanket, folding it at least 15 times. I started feeling serious and that nurses were judging me, chatting about me at the front desk. Husband came in after work each night and noticed my fussing but didn't make much of it. I started having irrational thoughts that the nurses had thought I'd neglected the baby in some way, despite numerous compliments on my care and abilities bathing, feeding etc One nurse mentioned how beautifully wrapped our baby was in his crib.
We arrived home to the first day as a family. I fed on demand and instinct and my baby slept inbetween. An energy erupted in me, whilst he slept I stayed up writing thank you cards, then scribbling then out, then running from room to room cleaning in the middle of the night. My husband woke for work and noticed I hadn't been in bed but I shrugged him off. After he drove out, I swept the driveway at 6:30am with a ferocious speed unable to let the broom go until all of the leaves were swept. After these few days became a euphoria that was incredibly powerful, the hectic speed was replaced with an elation like I'd never felt before.  I later learned this was the start of a manic episode.
During the next few weeks I became overly concerned that our baby together with my husband would be harmed. I had irrational beliefs that took hold, fearing that explosives were in our roof. I started examining the power point sockets and climbing a ladder to investigate the man hole. Nothing made sense. My husband was ordered to check the roof many times and 'gave in ' to my demands.
My baby was always looked after and the house so tidy that no one ever suspected at that point when they visited, that anything was wrong. Baby putting on weight with a healthy chart, clean washing etc. But I was slowly going into a depressive mood. I became exhausted and guilt took over with a strange sense and belief that I was evil by nature and deserved punishment. I couldn't get rid of these thoughts in my head. I think to conquer them somehow I just kept ploughing through daily tasks. The manic and depressive state sometimes seemed mixed, high energy with overwhelming guilt and inability to move from our home. My baby always had clean clothes but my husband and mum noticed that I was not changing my clothing, not washing my hair either for up to a week. I can't understand how I'd look after our son impeccably but not myself.

My energy levels swang back and forth over six months and I became housebound, ordering husband to get the shopping. I couldn't leave our safe house. Visitors started to agitate me, interfering with my insistent need to have our beautiful boy in a routine. They wanted to wake him for cuddles and some stayed for hours. I let them but cracks were starting to show.
I longed to know what it was that made me become so intense. My husband bacane extremely worried and after six months post birth I saw a psychiatrist after many arguments about me thinking my baby would be taken from me. My illness was given a name. I soon ventured out with my little guy to a mother's group, playgroup when he was 10 months old for interaction and play with other children etc. I never ever discussed my experience though, just kept it private.
I longed to find books and stories of other people, woman etc to get some relief.
This is part of my journey, it's tender, it was what we lived in all of its intensities. I still, still have those memories of a time when the illness was at its worst and am working toward self forgiveness. I'm nearly there but something tells me I don't need to forgive myself, it was no ones fault.

5 Supported
Reply
9 REPLIES 9
in response to: Sharing part of my story

Thank you so much for sharing. Courageous and although horrific for you and your husband to go through, your family of three stayed intact. No, it wasn't anyone's fault. It can happen when a baby is born. Trigger a manic/depressive episode.

2 Supported
Reply
in response to: Sharing part of my story

You communicated your experience so lucidly @Caringsoul73 . Thank you. It was actually quite sad to read, as it reminded me of my own experience. What do you think was going on for you, beside your diagnosis?

2 Supported
Reply
in response to: Sharing part of my story

Thank you for sharing @Caringsoul73

i really dont know what to say.... I will just give you a virtual hug instead

3 Supported
Reply
in response to: Re: Sharing part of my story

Thank you for listening and your lovely reply. As you mention that the three of us stayed intact, yes absolutely as much of a confronting struggle for months on end it's something I'm grateful for to this day, many years later. Often, things get thrown our way in life that we might not of ever been prepared for so I hold dear that we persevered through it all. I do regret not getting help earlier because it could've shortened some of our suffering but I was convinced my world would be taken from me.

2 Supported
Reply
in response to: Re: Sharing part of my story

1 Support
Reply
in response to: Re: Sharing part of my story

Hi @Kelpie , lovely to meet you

Thanks for listening.  I offer apologies if I made you feel sad reading my post. Sometimes we hold things inside over a long stretch of time and I know in my case, sometimes more than other times my mind goes back to that particular time. I'm in a much better position these days but the memory lasts and can circle me.
In response to things going on at the time. Well, there was severe morning sickness which required a lengthy hospital stay on a drip for the first 3.5 months of the pregnancy due to not keeping water down and not being able to eat.  I guess, it was terribly abrupt and I resigned early from my job to just deal with the pregnancy. That time was difficult and prior to pregnancy I'd experienced depression and mild  anxiety before in life but never mania.

The experience was lonely, persistent and frustrating. I ended up at a support group one year after onset just to sit and listen to other people. This helped break down the isolation.

2 Supported
Reply
in response to: Re: Sharing part of my story

Hi @Lostandalone , lovely to meet you

Thank you so much!

1 Support
Reply
in response to: Re: Sharing part of my story

@Caringsoul73 no problem. Many families are ripped apart. Testament to the strength of love between your husband and yourself. It is utterly frightening having the absolute belief your family us going to be taken from you. I can only I lost my entire family. It wasn't all my doing. It's beyond painful. So, you know you got help and you kept your family. That us just from someone else's perspective.

0 Support
Reply
in response to: Sharing part of my story

Hi. This is the first time here. Your story was similar in many ways to mine. After my baby was born, i didnt cope.  I couldnt ask for help because i was scared they would take my baby from me.  I was scared people were trying to get in the windows. I was putting sharp objects away, so " they" couldnt hurt me or my baby. I was very alone. I had no one i could trust or turn to.

Luckily i called my dr in the middle of the night,  one night & blurted out the truth. He told me to go to the hospital, & i did. My baby and i were cared for at a post natal place for quite a long time.  That was the beginning of decades of therapy for me.

Today i have a good relationship with my grown up daughter.  She is doing well in the world. I am surviving, but still suffer with depression & other disorders. So life is lonely. I dont have any close friends, & feel i have no purpose sometimes. Though i am still here for my daughter.

I am lucky to have access to care in Australia. I try to have a network in my life. But sometimes i think it will be a relief when my life is over, because its been hard. Thats on the bad days. But there are lots of good days when i feel fairly content and grateful.